Stock splits — when a company decides to increase its number of shares outstanding by dividing existing shares or by multiplying share count and reducing share price to compensate — can stir up a lot of investor excitement. Apple (NASDAQ:AAPL) is a perfect case in point. Since the tech hardware leader went public more than 40 years ago, Apple has split its shares five times and created massive shareholder wealth. 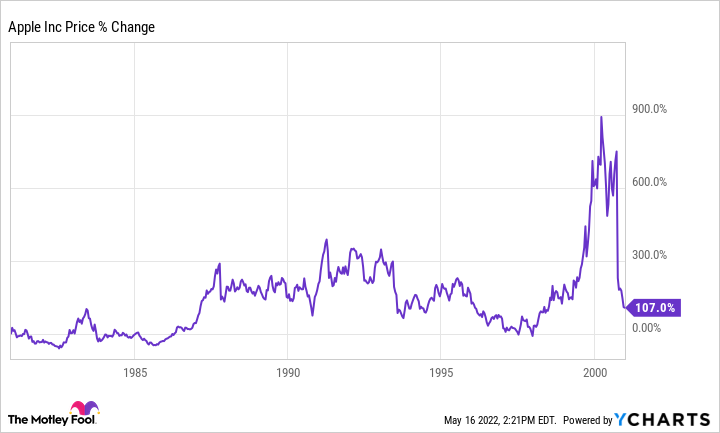 Apple, one of the most valuable companies in the world and with a current market cap of more than $2.3 trillion, had its initial public offering (IPO) on Dec. 12, 1980. The IPO price was $22 or $0.10 per share when adjusting for the five stock splits it has initiated in its history as a public company.

Some investors get excited about stock splits because they believe they make the affected stock cheaper. While the share price is indeed reduced as the result of a stock split, the valuation usually remains unchanged since the stock price and increase in shares outstanding usually offset each other, resulting in no change to a company’s market capitalization or enterprise value.

Nevertheless, some investors think the split results in increased investor attention and causes the share price to rise before and after a stock split. Here’s what Apple’s history tells us regarding this belief:

Apple has endured some tumultuous times, especially in its first two decades as a publicly traded stock. For the 20 years after its late-1980 IPO, the share price only doubled in value through Dec. 31, 2000. 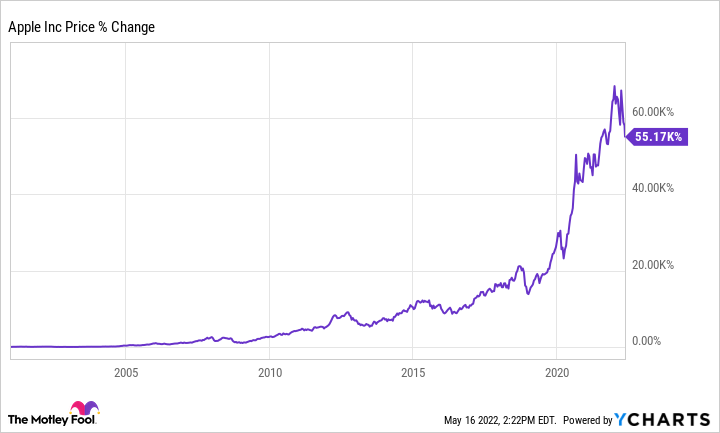 Much like the stock splits in Apple’s early history, the company’s stock splits in the 2000s and onward were prefaced by a run-up in stock price. Performance in the year after the split was respectable, too. After another 2-for-1 split in 2005, Apple divided its last two splits by a much greater amount in 2014 and 2020.

Apple’s history of stock splits shows that the hype leading up to the new shares being doled out to shareholders is greater than the event itself. Apple’s share price performance in the year after a split is a bit more of a mixed bag.

However, more important than Apple’s stock splits is the business’ performance. In each of the five times the tech hardware designer has split its stock, it was experiencing strong growth in sales and profitability. The exception was in 2000, when sales dipped between the dot-com bust and the release of the iPod in 2002.

The lesson: Companies such as Apple split their stocks for good reasons such as managing stock-based compensation for employees and share repurchase programs to return excess cash to shareholders. However, as exciting as stock splits may seem, the real reason to buy and hold a stock for the long term is because of secular growth trends that benefit the company.

How to identify stock market winners

Mon Jun 13 , 2022
Discovering the correct enterprises to devote in can be a challenging endeavor, but veteran trader Mohnish Pabrai tells CNBC how he identifies extensive-time period winners in the inventory market place. Pabrai, taking care of companion of Pabrai Investment Money, is greatly recognized for carefully adhering to Warren Buffett’s concepts on […]